There are several 1960’s/1970’s TV shows that many of us 80’s kids grew up with.  Honestly, I was surprised when I got older and familiar with IMDB just how old some of the TV shows that I grew up with actually were.  None the less they were and continue to be timeless.

My Peg Friends in this post represent some of that timeless TV…….

Up first is The Andy Griffith Show (1960-1968).  Things seemed so easy in Mayberry……..Where the shadiest characters you could run in to were Otis the town drunk or Ernest T Bass the town troublemaker…….

Below is Andy, Aunt Bea, Opie (and his fish), Barney, Gomer and Goober:

Next we have one of my ultimate favorites……Bewitched (1964 – 1972).  I always thought Elizabeth Montgomery was absolutely beautiful…..and I totally wanted to be able to wiggle my nose and have my hearts desire……

Below is Darren, Samantha and Endora:

Below is Jeanie and Major Anthony Nelson: 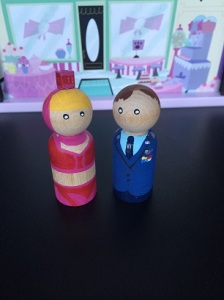 Next up is Happy Days (1974-1984)…….where I had a slight crush on the future Charles in Charge which oddly enough I didn’t paint.

Below is Ricky and Lucy and her bottle of Vitameatavegamin:

There was an error retrieving images from Instagram. An attempt will be remade in a few minutes.